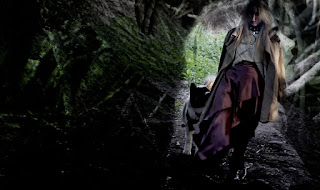 ...in the film...http://www.arteidolia.com/cecelia-chapman-planet-of-dreams/  7th century Queen Lupa outmanoeuvres Rome, church, early empire powers, Visigoths and annoying pilgrims dragging the body of their Apostle all over her territory. She and her countrywomen freak out the patriarchal, order-loving Romans, and early Catholic Church. They are called 'witches' for their healing and animal skills, herbal, astronomy and extensive knowledge. Variations in her legend compelled me to make an examination of her character in film.
Tamara Pereira and Sayuri. Jeff Crouch music.
Newer Post Older Post Home